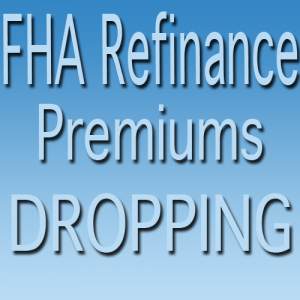 There was a bit of speculation recently after an announcement from the Federal Housing Administration (FHA) stated their insurance premiums would be rising.  The speculation was that premiums regarding the FHA Streamline Refinance program would be dropping.  Well it seems that is the case.  Homeowners with mortgages backed by the FHA will now face premium fees that are roughly half of what they previously were.

Every step, even if they’re baby steps, made towards fixing the housing market is a good one.  Reducing the premiums is the right thing to do in order to attract homeowners who are still in “underwater” situations.

The FHA has released the exact numbers so here is what you can expect.  The upfront insurance premiums borrowers face will be reduced from 1% to .01% of the overall loan balance.  Beyond that, annual premiums will drop from 1.15% to 0.55% of the overall loan balance.  Now there is one little catch that has been implemented, these changes are only viable for those borrowers who took out their loans BEFORE June 1, 2009.  That deadline is definitely a big downside to this change, a downside for both the FHA and for homeowners as the FHA has backed a large amount or mortgages AFTER that date.

You would think that homeowners would be chomping at the bit to refinance and save themselves some cash but there are still plenty out there that are still resistant to do-so. According to the White House, the potential number of homeowners this mortgage program ALONE could help, is 2-to-3 million.

That averages out to near 60,000 homeowners in every state that could benefit from an FHA Streamline Refinance.  Meaning, there are 60,000 people in Michigan that we could help save a pretty penny and all that is needed is a quick call to one of our loan-officers at 1-800-555-2098 to get started on your refinancing!