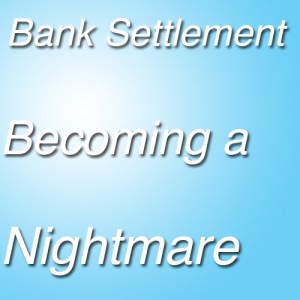 Remember that massive $26 billion bank settlement that homeowners long rejoiced about?  The one that brought homeowners that were facing potential foreclosure a bit of salvation?  Yeah well it’s not quite what it’s cracked up to be.

When the huge settlement between some of the nation’s largest banks was announced, people expected to receive major savings on their mortgages.  Now that is still the case, but the number of people receiving relief is far less than previously thought.  The settlement will allow for roughly one million homeowners to have their principals slashed by upwards of $100,000.

What exactly happened to other massive amount of people that were expecting relief though?  Why are they no longer being recognized?  The answer has been angering countless people.  It’s because the banks that issued the borrower’s mortgage(s) simply did not hold their mortgage.  In other words, several banks have been selling mortgages to both Fannie Mae and Freddie Mac without the knowledge of the homeowners.  How many of the loans were sold-off though?  Well that number is far higher than anyone would have imagined.  The housing boom that occurred at the turn of the millennium until 2007 saw 20% of the loans go into the bank’s own portfolios.  The other 80%, well you can find those loans in the possession of Fannie Mae, Freddie Mac and other random investors.

So what happens now?  Bluntly put, the majority of borrowers lucked out.  There doesn’t seem to be any indication(s) that details of the settlement will be adjusted in anyway to accommodate everyone being left out.  It’s not all crappy news though, at least for those of you with Michigan property because even though you may have struck out in this bank settlement.  You wont strike out with Riverbank Finance as our specialty is saving you a pretty penny by refinancing your mortgage.  Give us a call at 1-800-555-2098 to get the ball rolling!