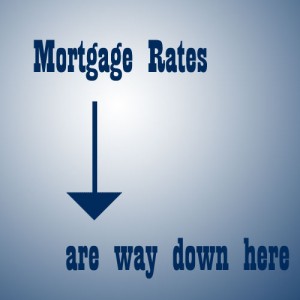 Mortgage rates are setting new records for all-time lows. For the seventh time in eight weeks, we are seeing record low mortgage rates. According to Freddie Mac’s weekly survey, the average prime offer rates for 30-year fixed mortgages are at a 3.66% rate, which is down from last week’s average rate of 3.71% rate.  Currently, the average rate of 3.66% is the lowest it’s been since mortgages started in the 1950’s. This means that this is most likely the best period in your lifetime to refinance your mortgage or purchase a home.

If you are looking for a 15-year mortgage, the rates are currently at an average rate of 2.95%, just shy of the 2.94% reached two weeks ago, and down from last week’s average of 2.98%.  Short term mortgages at 15 years or less have lower rates than the more common 30 year fixed loan.  Rates are so low that many of our clients are able to cut their loan term in half and keep their payment the same going from a 30 year to a 15 year mortgage.

Rates have been maintaining record lows for the 2012 calendar year.  In fact, since December, the rate has been below 4% on 30-year fixed loans for many borrowers.  This has been great for homeowners that have been on the fence and missed the first wave of low rates in 2011.  The big question is when will rates begin to rise?  It is anyone’s guess at what point we will start seeing rates above 4%. If you are eligible for a refinance and have been holding off hoping for rates that drop even lower then you may be missing the boat

Market analysts and economists say if more people start refinancing during these times when rates are at record lows, it could provide the help needed to build the economy. Lower interest rates provide lower payments, thus allowing more people to spend more money.  With the lagging US economy and slow job growth, we could use a large boost such as this.

Investors are seeking Mortgage Backed Securities (MBS) as stable investments with the European economic crisis. Mortgage rates track the yield on the 10-year Treasury note and because of Europe’s unresolved debt crisis; it has led mortgage rates to drop since investors have been buying more Treasury securities. These are considered safe investments. The yield falls as demand for Treasury’s increase.

Through operation twist, the Feds plan on keeping rates low. As long as the Federal Reserve continues selling short-term Treasury’s and using the proceeds to buy long-term Treasury’s, then the yield will more than likely fall even lower than it is currently. The goal of this program is to drive long-term interest rates lower to entice more borrowing and spending.  Rates may stay low for long periods however it is a gamble waiting to see when rates will start to rise.

Request a quote for your record low mortgage rate